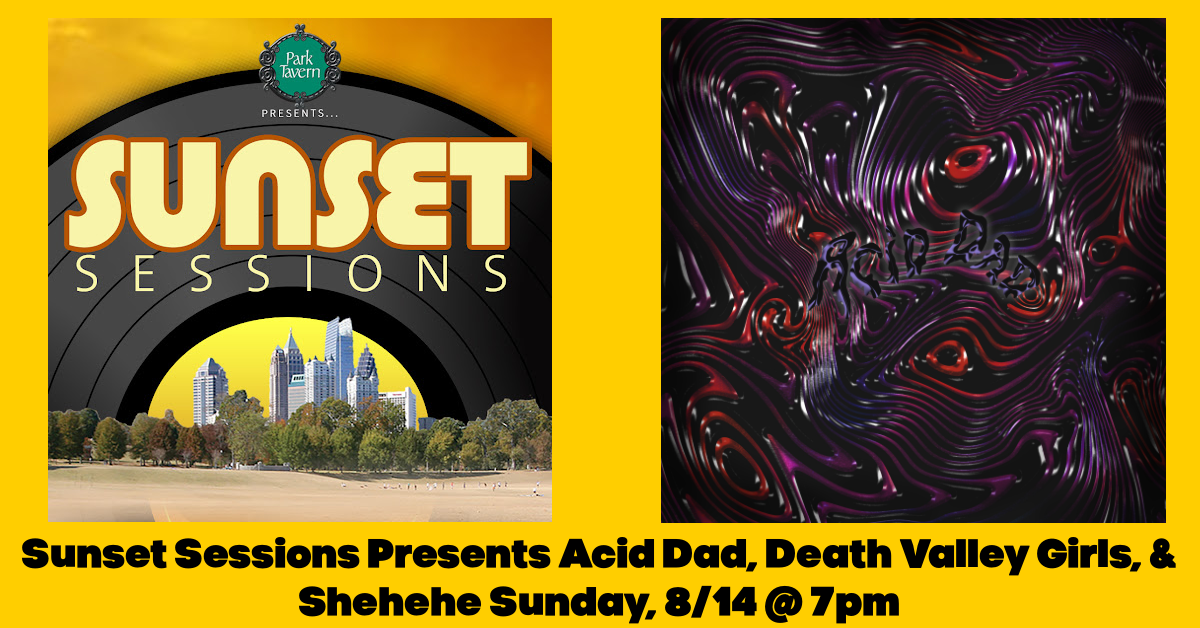 Who is Acid Dad?
Acid Dad are a twangy psychedelic garage band whose hazy lo-fi tunes are blanketed with a layer of 60’s fuzz. They speak of the multiple personalities hidden within their sound, claiming to have “broken down song structures countless times in order to achieve a smooth flow between radically different sections of the songs.” Acid Dad makes the kind of music that urges you to dance as much as it urges you to slam dance, to pound your fist as readily as it requests you solemnly sway.

Who are the Death Valley Girls?
For nearly a decade, Death Valley Girls have made it their mission to remind the punks, psych-rockers, garage aficionados, and desert mystics of the communal, transcendental, and triumphant power of music, as evidenced most recently in the riotous affirmations of their 2022 track “When I’m Free.” The song fuses Bonnie Bloomgarden’s passionate vocals, Larry Schemel’s anthemic guitar chords, rousing sing-along choruses, and feverish organ lines into a perfect three-minute shot of adrenaline and dopamine. Despite the old-school nature of their instrumentation, Death Valley Girls are well aware of the revolutionary power of the dance floor, so they approached one of their heroes to help re-envision “When I’m Free” for the club crowd. What better way to reinforce the liberating spirit of the song than to give it to Peaches—an artist who continues to push boundaries in a career that spans over two decades, and who has helped so many people navigate sexuality, gender, identity, and being comfortable in one’s body in the new millennium. Under Peaches’ meticulous care, “When I’m Free” transforms from a scrappy rock song to a throbbing, minimalist club banger. The musical key switches from major to minor, taking the song from celebratory mode into a leaner and meaner message of empowerment. Bloomgarden’s impassioned vocals remain in place along with a few organ glissandos, though the rest of the original is excised in favor of stark four-on-the-floor beats and pulsing synth bass. The sound may prompt a different type of gyration than the original, but the spirit of freedom and revelry remains and takes on a whole new angle under Peaches’ masterful manipulations. Suicide Squeeze is proud to present the Peaches remix of Death Valley Girls’ “When I’m Free” in Spring 2022.

Who is Shehehe?
Shehehe’s music has always been rooted in heartfelt, autobiographical songs about a band and its life: the things that drive them crazy, the things they love, their awes, triumphs, and humor.
Whether you see Shehehe live or hear them on a record, from that first note to the last you’ll be bouncing and singing along to the infectious, anthemic chants of youth and subsequent struggles with adulthood. Snarly call and response male/female punk vocals, occasional soft, sweet harmonies, and a scream or two paired with thumpy, pounding, aggressive, hypnotic rhythms inspire and cultivate a genuinely honest, nostalgic, yet unique rock & roll scene. A scene not just in their hometown of Athens, GA, but all over the plethora of cities these road-tested, road-worn, and at times road beaten band members have been during their tenure that started in 2011. Uncompromised, unabashed, uninhibited, a must-see for fans of any kind of music, Shehehe is always a great time!