Our Free Outdoor Summer 2022 Concert Series is Back

The Park Tavern is excited to bring back our free summer concert series, Sunset Sessions, for the seventh year in a row. We have a fantastic lineup with some of the Southeast's most talented artists. Each concert showcases three artists or bands. Sunset Sessions is every Sunday beginning April 24th and runs through September 25th. Shows start at 7 pm and allow concertgoers to enjoy free live music, food, drinks, and gorgeous sunsets. Nothing beats exploring Midtown Atlanta on a glorious sunny day, except a spectacular sunset with the people you love listing to live music. 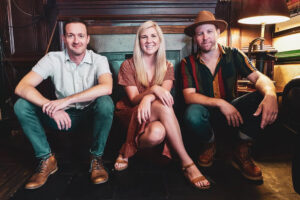 Next in the lineup is the band The Murphs. The Murphs are an American roots-rock band based in Atlanta, Georgia, featuring Austin Coleman, Katie Coleman, and Cody Marlowe. From Blues and Folk to Rock and Country, a wide variety of genres are found in their music, all directed to the expression of true, honest rock n roll. Singer/songwriter Austin Coleman (www.austincolemanmusic.com) primarily plays bass in the band, adding lead and harmony vocals throughout the set. His wife, Katie, plays keys, tambourine and adds lead and harmony vocals. Brother of Katie, Cody Marlowe (www.codymarlowe.com), sings and plays electric guitar. Together, this family band blends intriguing harmonies and raw tones reminiscent of music found in the old days.

The Banditos are the headliners for this sunset musical masterpiece. They will have you dancing and grooving the rest of the night. Who are the Banditos, you may ask?

The Banditos are originally from Birmingham, AL. The Banditos now operate out of Nashville, close to, and simultaneously very far away from, the gleaming towers and industry hustle of Lower Broad and Music Row. With the rugged power of a flashy Super Chief locomotive, the Banditos' self-titled debut album bodaciously appropriates elements of '60s blues-fused acid rock, ZZ Top's jangly boogie, garage punk scuzz a la Burger Records, the Drive-By Truckers', the populist choogle of CCR, Slim Harpo's hip shake baby groove, the ebullient folk of electric Dylan, gutbucket Fat Possum hill country mojo and the Georgia Motherf**king Satellites. From backwoods bluegrass to slinky nods to Muscle Shoals soul and random bits of doo-wop sweetness, the Banditos recall many but sound like no one but themselves. On April 12th, the Banditos released a new single called Waves. Check out this new song at Egg Hunt Records or click HERE. Make sure to catch them live at Park Tavern in Piedmont Park, conveniently located along the Atlanta Beltline on the corner of 10th & Monroe.